Free UK next day shipping over £25

Specialist Mould Remover for use on delicate materials. Removes all mould stains and mould smells from fabric, leather, and wood.

We offer gold trade customers free UK mainland next working day delivery on all website orders. This applies to orders placed and paid for by 2pm. Orders placed after 2pm will be dispatched the next working day. Deliveries to UK highlands and islands may take longer, surcharges may apply to orders containing hazardous products shipping outside mainland UK.

For mainland UK delivery before Christmas, please place your order by 2pm on the 22nd December. Please note that is only a guide based on information from our couriers. We cannot guarantee delivery dates as shipments may be delayed by courier issues. We recommend you order as early as possible if you require your products before Christmas.

During the Christmas and New Year period, there will be some dates that we are unable to dispatch orders, these dates are:

On the 24th December and 31st December, couriers are collecting in the morning. 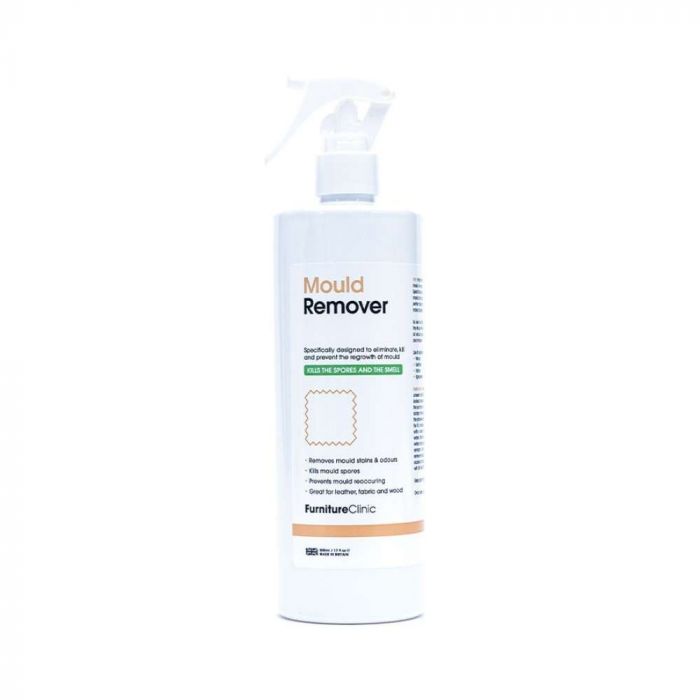 Mould Remover is highly effective at eliminating mould on any surface, on contact. Specifically designed to remove mould and prevent its regrowth. As well as killing the mould itself, Mould Remover removes all odours associated with mould, mildew, foods and liquids.

Application is simple; just spray the Mould Remover onto the surface and leave it for 10-15 minutes for it to kill the mould.

Our Mould Remover is specially formulated for removing mould from delicate surfaces such as fabric and leather. It is the perfect mould removal solution for all household mould problems, and can also be used to remove mould stains from car interiors, caravans and all other items.

Mould Remover kills the spores and growths associated with mould on any surface, soft or hard, such as leather, fabric, and Wood. By destroying the spores, Mould Remover not only removes the original growth but will also stop the mould from reoccurring.

Our Mould Remover can be used to remove mould stains from any surface. It is designed for use on delicate materials, but works fine on hard surfaces too.

Application is simple, just spray the Mould Remover onto the material and leave it to work for 10-15 minutes. During this time, the Mould Remover kills the mould spores, which removes odours associated with mould, and loosens any mould staining so it can be blotted off.

The below explain step by step how to use the Mould Remover the remove mould stains; the same instructions apply to all surfaces contaminated with mould.

- Always test on an unseen area before use.
- If the surface is thick with mould, clean the excess off using a cloth.

- Spray the Mould Remover onto the contaminated area and leave for 10-15 minutes.
- During this time the Mould Remover will attack and kill the mould spores.
- This action will remove any mould odours and loosen any staining.

- Rinse the surface with clean water, or if applying to leather, wipe the surface down with a slightly wet cloth.
- Repeat the process, if necessary.

In step two when the Mould Remover is sprayed onto the surface it starts to kill the mould and loosen and staining. Then in step three the idea is to extract the mould from the surface.

Using the Mould Remover in this way not only removes the current mould problem, but because this product kills the spores, it will also prevent the mould from re-growing.

- The Mould Remover kills the root cause of the mould: the spores. This will not only remove the mould staining and smell, but because the spores are destroyed, it also prevents the mould from reoccurring.

- The Mould Remover is intended for removing mould from fabric, leather, and wood. It is formulated to be gentle, yet effective. It will also kill mould spores on any other surface, however due to the nature of how hard surfaces stain, the Mould Remover may not remove stains from other surfaces, such as the grout in bathroom tiles.

Video
The below video shows you how to use the Mould Remover the remove mould stains from fabric and leather. The same process can also be used to remove mould from wood and all other hard surfaces.
FAQs

A. Mould Remover is formulated to be highly effective at removing mould and killing mould spores on any surface. It is ideal for use on furniture, wood, and fabric surfaces. However, it has not been extensively tested on other surfaces, so we can not guarantee its success.

A. Absolutely. When applied correctly, mould remover will completely remove all mould growth and kill the spores. This will prevent mould from regrowing after treating the area and negates the health risks associated with inhaling mould spores.

Join our mailing list to receive exclusive discounts and be kept up to date with any promotions, new product releases and how-to guides.

Enter your email address below to join our mailing list and you will be sent a 10% off voucher code.

Just enter this code in the cart to receive 10% off your next order: